Sting opens up his Tuscan villa 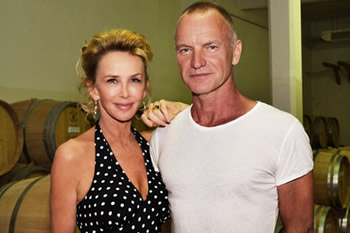 The leader of The Police has already turned Il Palagio, a 16th century estate near Florence, into an active farm, producing honey, olive oil and critically acclaimed “biodynamic” wine.

Guests will also be able to use the large swimming pool, a giant chessboard in the garden and dine in Sting’s wine cellar, lined with “enormous, ancient barrels”, according to the Italian estate agency Immobiliare.

With room in the outbuildings for 50 people to sleep, a wedding party renting them out for a week could rack up a bill of €42,000.

Despite his fortune, Sting’s decision to rent out the estate buildings could have been prompted by a property tax introduced last year by the Italian government in a bid to bring in urgently needed revenue, said Immobiliare.it spokesman Andrea Polo.

“I don’t know how much money you earn selling honey, but with the new tax Sting will have been handed a huge housing tax bill last year,” said Mr Polo.

Guests heading for Il Palagio will get to see the work that Sting and his wife, Trudie Styler have put into the estate, which boasts woods, lakes, a five acre kitchen garden and bee hives.

Since buying the estate in 1999, when it was in a state of abandonment, Sting has built it up by buying acres sold off by the previous owner, Duke Simone Vincenzo Velluti Zati di San Clemente.

The singer, who has installed a 10 foot statue of Buddha at the main house’s chapel, has described grabbing a basket and joining in with the olive harvest as “therapeutic.”

The estate’s olive oil has been sold at Harrods, while Sting’s website, which gives information on his next solo concert dates, also promotes his wines, including a Sangiovese-based red called When We Dance which is described as “Fruity and berryish”.

Looking to build on his supply of home produce to retailers, Sting has opened a shop for direct sales at the estate, offering his oil, wine, honey and salami, which is made from a local breed of pig.

Mr Polo said the offer to rent out the cottages would be popular.

“It’s Tuscany, it’s beautiful and it’s a lovely property, so it is clear the place will be in demand,” he said.

“Sting is also unconventional and doesn’t live in an ivory tower so he might show up at your event.

“Along with Tony Blair it was Sting who drove the myth of Chiantishire, and that is how he can charge 7,000 euros a week for a cottage, although for that price you can see he is aiming at an international clientele.”

By Tom Kington, The Telegraph