Fashion as art, the Gucci Museo in Florence

02/04/2013Redazione Made in TuscanyEventsNo comments 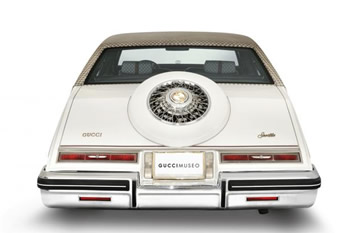 The Gucci Museo in Florence pays tribute to its founding father as well as the city’s own craftsmen.

The Gucci Museo in Florence pays tribute to its founding father as well as the city’s own craftsmen
No other city is home to so much art per square metre as Florence. Often called Renaissance city, the capital of Tuscany is the birthplace of such great artists as Leonardo da Vinci, Michelangelo and Sandro Botticelli, as well as Thailand’s father of modern art, the sculptor Silpa Bhirasri.

Fashion too is a national emblem and the “Made in Italy” label is especially prestigious when it carries the distinctive mark of Florentine craftsmanship.

To celebrate the 90th anniversary of the House of Gucci, founded by Florence son Guccio Gucci in 1921, the fashion house inaugurated the Gucci Museo, a living museum conceived by Gucci’s creative director Frida Giannini that encapsulates the house’s “Forever Now” philosophy.

Opened officially on September 28, 2011, Gucci Museo is located in the heart of Florence’s Piazza Signoria, inside the historic Palazzo della Mercanzia, which dates back to 1337 and it itself a symbol of Florentine arts and craftsmanship. The two splendid buildings served during the Medici times as the offices of the Ufficio della Condotta degli Stipendiati, the Universita dei Mercanti and Ufficio dei la Mercanzia. The internal restoration that has taken place respects the building’s history through the use of materials that integrate naturally with the original architecture.

Visitors can still admire the traditional praying room, confirming Gucci president and CEO Patrizio di Marco’s statement that the Gucci Museo is also a tribute to its hometown. Although Gucci is today a truly international company and controlled by the French group PPR, the brand remains a Florentine success story. Di Marco credits much of the house’s success to the traditions, skills, and innovation of local artisans, who proudly represent the values of the Made in Italy label.

The museum spans 1,715 square metres across three floors and is divided into different thematic rooms inspired by the Gucci’s iconic motifs and symbols, rather than chronologically, which allows the pleasure of dipping into all sorts of wonderful displays of Gucci craftsmanship. The permanent exhibition at the heart of the museum provides the house’s legacy and is captivating in its array of archival delights. At the opening, Giannini said she felt it was right that the museum should both conserve and celebrate the most significant moments in the history of the fashion house providing an official account of its origins, evolution, and cultural influence.

The recent press tour was led by Ornkanya Thongplengsri, Gucci Bookshop officer and the only Thai attached to the museum. Our journey begins in the permanent exhibition space begins on the ground floor with the “Travel” section. It’s a fitting place to start too as it was with suitcases and travel accessories that Guccio Gucci made his debut on the world fashion stage, his inspiration coming from the sight of the luggage laden clientele arriving at London’s Savoy Hotel.

“He was a lift boy,” Ornkanya says. “On his return to Italy, with a family background in leather, he rapidly built a reputation for impeccably high quality and refined craftsmanship. His statement ‘Quality is remembered long after price is forgotten,’ is still quoted today. The Diamante suitcase was very popular with the jet-setters of the ’50s, ’60s and ’70s.”

Among the highlights on this floor are the first cases and trunks to be produced in Florence bearing the inscription: G Gucci, Articles for Travel, Florence. There is also a zebra-skin suitcase from the ’30s, along with a magnificent 1979 Gucci Cadillac Seville. The exterior includes the interlocking double “G” of the Gucci logo as a hood ornament and the c-pillar covered vinyl roof. Inside the car, the headrests and headliner also wear the double “G”.

The staircase to the museum’s upper floors is decorated with photographs of films such as “La Dolce Vita” and superstars dressed in Gucci, among them Audrey Hepburn and Vanessa Redgrave.

The first floor is dedicated to the representation of other Gucci themes and icons. The “Flora World” is a symbol of a delicate and poetic imagination. Flora was created in 1966 for Princess Grace of Monaco’s scarf, and the flora prints are echoed on exquisite wallpaper, a selection of bags, clothes, trunks, accessories, as well as chinaware.

Also on the first floor is the “Handbags” exhibition, an expression of artisanal craft combining practicality and contemporary design with original forms, innovative materials and refined craftsmanship. Signature designs include the Bamboo Bag, the Jackie, along with Gucci symbols like the horsebit and green-red-green web. “Evening” presents the most exclusive Gucci evening wear through gowns that evokes the master tailor’s skill and self-confident beauty and leads the visitor on to “Precious”, a display of unique clutches and rare valuables.

The Contemporary Art Space is also located on the first floor and serves as a showcase for works by selected artists exhibited in collaboration with the Pinault Foundation. “Cindy Sherman: Early Works is the latest exhibition and it continues through June 9.

The journey through the history of Gucci continues on the second floor with “Logomania”, a space chronicling the evolution of the double G monogram. A timeless graphic sign that has become an emblem of Made in Italy, the “GG” is the most significant symbol in Gucci’s long history. The initials of founder Guccio Gucci first featured on the clasps of his bags in the early 1960′s and spread to bags, cases, small leather goods and clothing. Today the monogrammed pattern remains strong as the symbol of heritage in modernity, appearing on everything from ties to

iPad cases. There’s even a 3D interpretation in Guccissima leather.

“Lifestyle and Sport” completes the journey with a showcase of the house’s iconic products including thermos holders and picnic sets, parlour games, table lamps, sets of glasses and an electric guitar.

“From fashion to recreational activities, Gucci is the first brand to produces lifestyle, sport, and home decoration products,” says Ornkanya, leading the group to the section of the museum dedicated to Gucci’s famed loafers, which made their debut in 1953 and are probably the most copied shoes in history.

Visitors to the museum can also enjoy a coffee, browse through a public library of 700 art and design books and stock up on souvenirs at both the bookshop and museum shop.