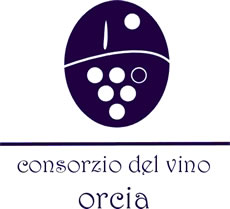 These wines are the expression of the commitment and passion of the producers, most of whom do everything themselves, from working in the vineyard to selling the bottled wine. In an era of globalization, Orcia wine is still a family product, produced by those who live in the vineyards, respecting nature and having excellent enology and viticulture skills.
At present the production is 270,000 bottles per year in about forty wineries.
The main varieties are red wines with a remarkable structure, harmony, complexity and maturing potential: great wines with the elegance of a beautiful ancient territory.

PRODUCERS OF GRAPES AND WINE

Consorzio Vino Orcia
Via Borgo Maestro, 90
53023 Rocca d’Orcia (Siena)
ITALY
Phone +39 0577 887471
info@consorziovinoorcia.it
www.consorziovinoorcia.it
Menu ✖
This website uses cookies to improve your experience. We'll assume you're ok with this, but you can opt-out if you wish.Accept Read More